Berlin is a city with two sides. On the one side is an interesting yet devastating history and the unique culture that has grown from it, on the other is an exciting night life. I’ll admit I’ve seen more of the history and culture than the nightlife but it’s out there! I promise!

I’ve been to Berlin twice, firstly on an evil trip with my university (and I mean that literally – it was for a Literature and Evil module) and secondly for a Valentines weekend away with my other single friends in Feb 2016. Each time was totally different because there is so much to see and do but this post will focus around my most recent trip. So if you’re wondering how to have the best city break in Berlin then take a sneak peak at my Berlin journal to find out…

The Valentines squad, my good friends Joey, Miriam and Grace were reunited after our last trip to Paris in 2014 and arrived at Freiraum hostel. We found this place on airbnb.co.uk and was perfect for a small group of friends wanting our own private space. The managers were so helpful in giving us instructions on how to get around and the best places close by for eats. 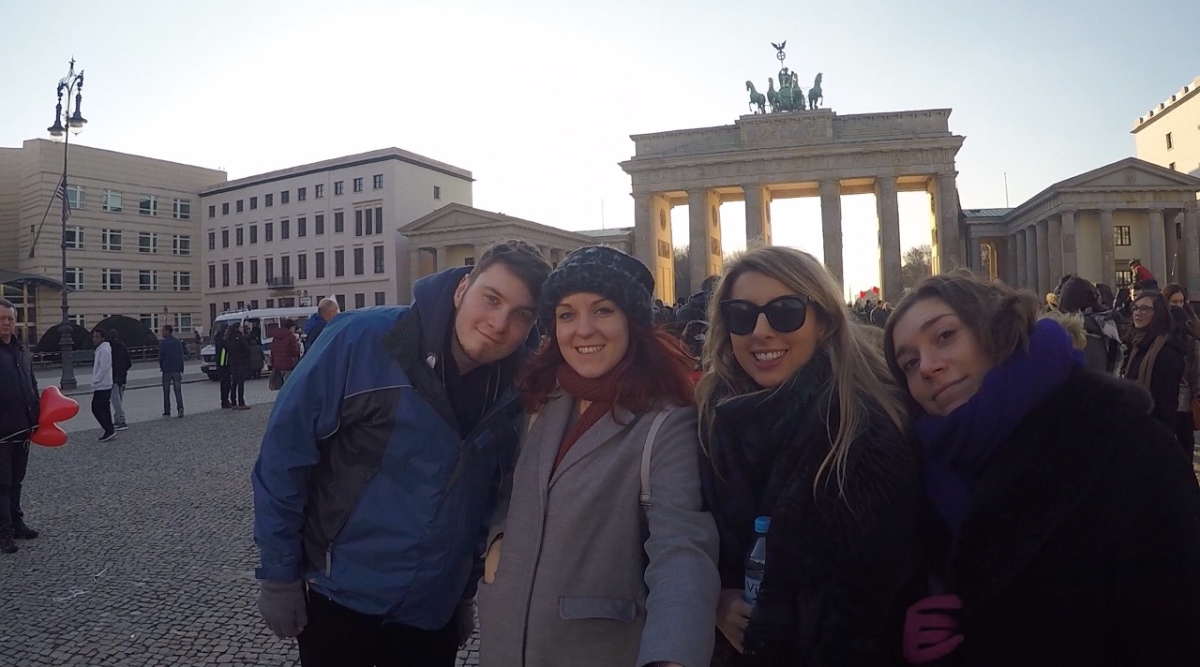 One of the best ways to see Berlin, especially if you’re a budget traveller, is to book a Sandeman’s tour. This company hires volunteers with a passion for history to give free tours around Berlin. Though the tour is free there is an opportunity to pay what you feel it was worth at the end and, trust me, you’ll want to give a generous donation because these guides earn it. Our guide, Rochelle, gave us 800 years of German history in 8 minutes and told us some incredible escape stories about the Berlin Wall – one guy even tight-rope walked across!

“I find it impressive how proud Germany are of their culture and how they don’t shy away from their awful history. Rochelle told us they are one of the only places where they are honest about their own crimes while remembering those that died at their hands.”

Other highlights of the tour include all of Berlin’s hot spots like the Brandenburg Gate, the Holocaust Memorial, Hitler’s Bunker, Checkpoint Charlie and Gendarmenmarkt square to name a few. As a book nerd my favourite stop was probably the book burning memorial in Bebelplatz, which I didn’t even know existed before. In the ground is a window you can peer down to see empty shelves beneath. Rochelle aptly quoted Heinrich Heine, a German poet and journalist who said: “Where they burn books, they will also ultimately burn people”.

“I thought this was beautiful that they would remember dead books, lost words, forgotten titles, ashy stories.” 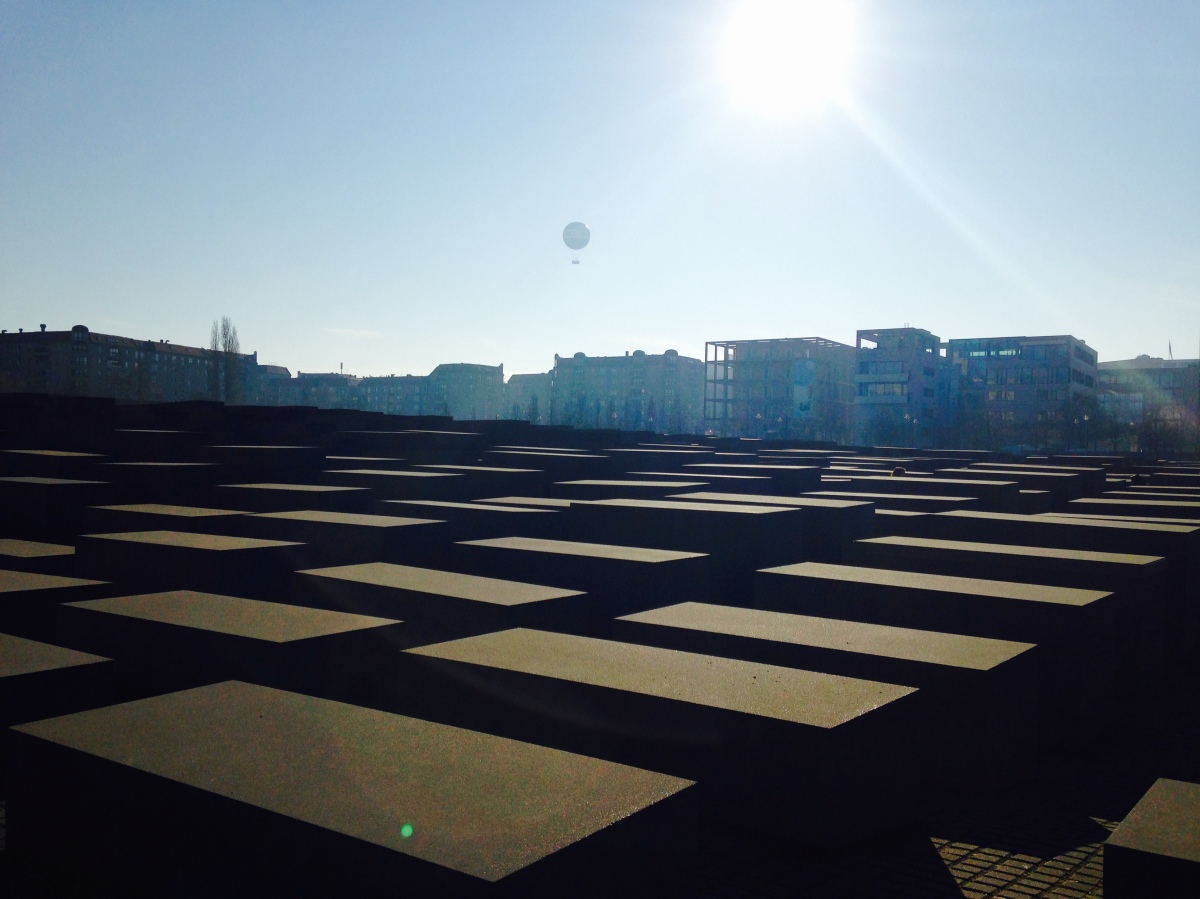 Once the tour was over we headed towards Rosa-Luxemburg Strasse, a short walk from Alexander Platz, to find a little Mexican burrito places called Dolores. There isn’t a huge amount of choice for places to eat around here but Dolores is one of the quick pit-stop places that serves up some tasty grub to keep you exploring.

And boy did we need it for climbing the 285 steps of the Berlin Victory Collumn! It’s cheap and worth the climb to see some spectacular views of the city. The perfect way to end a day of sightseeing.

“We made it just as the sun began to set, splashing orange and yellows across the horizon, making Berlin city glow.” 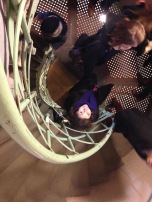 When the sun has gone down head over to Warschaur Strasse where there are lots of restaurants and bars. I recommend Euphoria for fairly cheap drinks and food but if you like cocktails then go to the swanky Goldfish bar for a cosmo.

The Valentines Squad temporarily parted ways as Miriam and Grace headed off to check out Berghain, a famous techno club and famously difficult to gain entry too (as the girls discovered). So while Miriam and Grace tried their luck there, Joey and I decided to do some more sightseeing.

Our first stop was getting our passports stamped at Checkpoint Charlie. At €5 for six stamps it might seem pointless to some people but it’s just the sort of souvenir I like. Be careful of scammers offering cheap stamps that may invalidate your passport though and get it done at the actual checkpoint.

Getting a few cheesey stamps was fun but learning more about the East and West Berlin divide was much more interesting. Right by Checkpoint Charlie is the Black Box, an informative little museum with propaganda, videos, posters, toys and news reels to explain all you need to know about the Cold War. It’s fairly small and will probably only take you an hour to look round but at only €5 entry and €3.50 for students it’s worth it.

Taking a break from history for a bit, Joey and I decided to visit Mauer Park Market. I had heard of this place last time I was in Berlin but didn’t get a chance to visit it. This quirky market is packed with vintage toys and cameras as well as some great street music.You’ll definitely come across some interesting finds here, my personal favourite was a homemade Mickey Mouse snow globe that looked more like someone had tried to preserve the poor mouse in a jar of formaldehyde.

Escaping the soggy afternoon we came back to the centre of Berlin to visit the DDR museum (€9 adult, €6 student). Berlin seems to love their interactive museums and this one did not disappoint. The majority of the museum is made up of cupboards you can pull open to see facts and displays about how people in East Berlin used to live. There is even a life-sized set of a house you can explore and an interrogation room where you can listen to an actual interrogation by placing your elbows on speakers in the desk.

We couldn’t leave Berlin without visiting the East Side Gallery. I could spend hours wondering up and down the wall admiring the different styles and interpretations on this important piece of architecture. When I visited last year you could walk right up to the wall and I witnessed several people leaving their own mark so now, unfortunately, most of the wall is protected by a chain link fence making the experience slightly less enjoyable. Still it is a must-see and I challenge you to find Batman amongst the many incredible paintings.

“I think people forget how important this artwork is. It symbolises something very significant and yet it’s becoming more and more damaged and graffitied. So sad.” 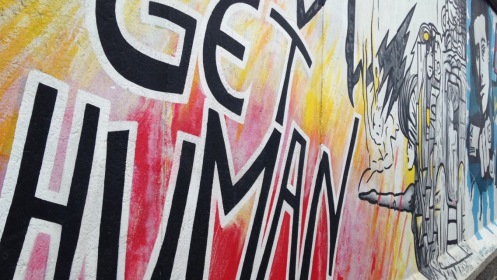 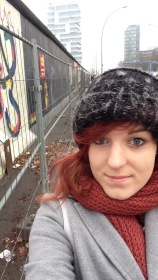 Before we left we had to visit Burgermeister, a tiny burger joint in a converted public restroom. From the outside it looks pretty innocuous but the burgers are so tasty. I’ll admit it wasn’t as great as the hype lead me to believe but it still made for a great lunch.

I  feel like I’ve seen and done a lot of what Berlin has to offer but that wouldn’t stop me from coming back again. Berlin is a city with as much going on as London but with a more laid back attitude. If you’re looking for a little escape from the 9-5 routine then it’s definitely the place to go.