A tour like this can be pretty full on but as we came to the middle portion things seemed to slow down a bit and we got more and more free time to explore by ourselves or simply relax by the pool. Travelling on your own it can be hard to know when is the right time to push yourself to go out and make the most of your time in a place and when to give yourself a break but G Adventures gave us permission to sit back and enjoy our time away from our busy lives back home. Even on a day off there was always something new and exiting to do yet it never felt rushed. It might be hard to believe we had some time to ourselves in between all these activities but trust me these were the most chilled days and our chance to unwind…

Day 18 – We had gotten a glimpse of life in Tordi Sagar the evening before. Dino told us about his work with rural villages before, fitting pumps so tha they had clean water and that afternoon we saw one and Riley even jumped in to give the poor man pumping away a break. The women bossed him about, telling him to work harder before lifting the heavy pots of water onto their heads.

The children seemed to know the drill with the tourists and one cheeky boy with bright eyes and wiry arms, held out his hand then brought it to his lips saying “chew gum? Chew gum?” Cat,the first person I met in our group, found some polos in her bag and tried to hand them round. It instantly turned into a mad house with the kids clawing at her, bouncing up and down excitedly as she held the polos out of their reach so that she might distribute them fairly. When the wrapper was empty they set her free and the cheeky boy put a polo into his mouth and cracked it in two. “Bleaugh!” He spat it back out on the ground. We laughed and he grinned mischievously.

This morning we encountered more excitedable kids, this time eager for Olivia’s stickers (though not quite as keen as the evening before), we saw people in their shops going about their work and we also go a chance to visit a potter. He had made hundreds of tiny diyas ready for Diwali but to us he showed of his more superior skills. He spun his wheel, a large round flat stone just balanced off the ground, faster and faster with a wooden stick, wet his hands and let the clay slip through his fingers. We were mesmerised as he quickly mounded a neat little bowl and deftly sliced it away from the rest of the clay and lay it on the ground. Next was our turn and lets just say our attempts weren’t quite so good. I even totally destroyed my first bowl and then next one was pretty wonky too – none of the finess of the professional. 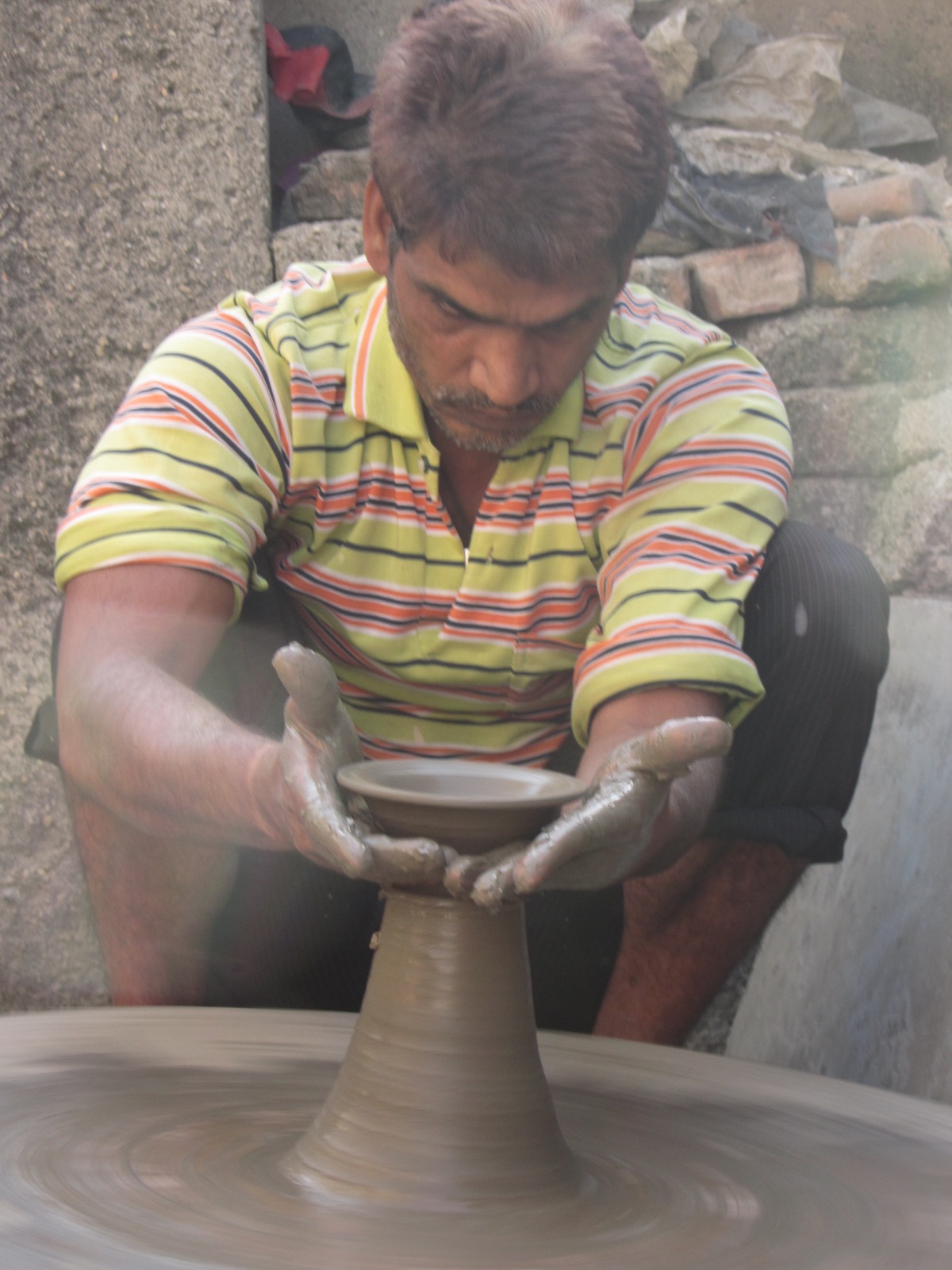 It was back in the party bus after our walk and on to Pushkar city. As we drove we sang to our new favourite tune:

“The party bus is coming, And everybody’s jumping, Tordi to Pushkar city, An intercity disco, The wheels of steel are turning, Diwali lights are burning, So if you like to party, Get on and move your body!”

Eventually we were all partied out though and arrived in bustling Pushkar in time for a walk through the markets to visit the only temple to worship Brahma. Apparently Brahma was late to the puja he and his wife, Savariti, were holding to bless their new house. She was so angry with him she cursed him that he would only be worshipped in Pushkar city – let that be a lesson to all tardy husbands!

The temple itself was beautiful, covered in white marble tiles, almost all of which were dedicated to someone. We walked up the steps and rang the bell, letting God know we were there to worship and received a small offering of sweets (remember rainbow dust? Pretty much that but white). After our little moment of calm it was time to set us loose on the market stalls and test out our bartering skills.
Day 19 – Having visited her husband’s temple the day before it seemed only right that we visit Savirit’s temple this morning. It was an early start so we could catch the sunrise and it was worth every single one one of the many steps to the top. Surrounded by mountains, monkeys clambering about in the trees nearby and a chipped cup of chai in our hands we watched the sun slowly emerge from the white fog that seemed to cling to the peaks. And there it was, a perfect orange disc hanging in the sky, the perfect reason to get up at 5:30am.

After a rare free day we had a treat in store for the evening. Dino took us out to the dunes to meet the nomads, although some of the group opted to get there by camel, the rest of us drove. It was so nice to be out in the middle of nowhere at a simple camp, sitting in a semi-circle at low tables as the sun set behind us. The first entertainer of the night was a magician doing sleight of hand tricks, which although were simple, I still couldn’t figure out how he did them – I mean, he made coins come out of my nose! Next there were dancers, who even dragged us up and got us to join in, but first we had to look the part. The nomads plonked down a bag full of brightly coloured fabrics and we dived in. After much faffing, discovering that the only way to keep a scarf on your head was to put sunglasses on top of them and a lot of help from Dino, we were finally all dressed up. The dancers looked even more beautiful than us, their outfits sparkling with sequins, but we did our best to keep up with them. When we were allowed to take our seats again, we watched our last entertainment – fire breathing! Flames leapt from his mouth and up towards the night sky. The evening ended with a hearty home cooked meal and as delicious as it was I had to refuse more by round five.

Day 20 – A second train ride took us from Pushkar to Udaipur (Dino’s hometown) but this time it was less comfortable. We truly got a local experience, turning up to find other people in our seats. One woman insisted she was in the right place until we pointed out the date for tomorrow and she sheepishly moved away. Another woman sat with her knee up, spread out across the small bench that was supposed to seat three of us and merely gestured to me to sit somewhere else when I tried to explain we had booked these seats. After a few firm words from Dino though, she reluctantly moved and we all squished into our assigned seats for the seven hour journey.

Luckily that afternoon there was nothing too taxing to do except enjoy a sunset boat ride and gaze longingly at the five star resorts that float on lake Pichola. In case we hadn’t got enough of the beautiful lakeside view already, which there’s no way you can, we ate at the Rainbow restaurant overlooking the water. I finally got to try some tandoori chicken cooked in a traditional tandoori oven and it was mouth-wateringly good.
Day 21 – Just as Jaipur is famous for its block printing, Udaipur is famous for its miniature painting. Dino took us to a local artist of good repute and we got to witness his skills first hand – quite literally. After showing us how they mix the paints (FYI they use cow urine for yellow), layer colours and add details before painting onto paper, silk or even camel bone, the artist asked me to come down and sit in front of him. He gently took my hand and picked up his finest paintbrush (made of camel eyelashes) and began painting on my nail. In seconds a tiny elephant and an even tinier baby between its feet had appeared on my nail. Everybody got a turn and soon there were tigers, camels, men and women in brightly coloured dress and blue and green peacocks on our nails. It was the perfect souvineer – if only it could last! But there was a chance to buy their more permanent paintings, which featured even more detail and colour but instead I opted to give it a go myself and do the painting class.

While others went off to explore some more or have their palms read, myself and a few others stayed behind with a different painter who sketched us out a peacock to copy. He showed us how to do each stage but every time our peacocks seemed to look more and more different from the pretty one he was created. I quickly discovered that I had messed up the tail feathers when it came to the fine details and none of us could weild the tiny brush as well as our teacher. But we had good fun and our very own personal painting to take home.

In the evening we got to celebrate Diwali, a part of the trip we had all been growing more and more excited for, and it turned out to be a fantastic night. We shared our stories about our palm readings earlier, laughed, drank, set off fireworks and witnessed traditional prayers. It was one of the best nights of the trip and you can read about it in more detail here.
Day 22 – A cooking class the next day was the perfect way to recover after Diwali celebrations – okay so more the promise of food than the cooking itself. Yet soon we were rolling and stuffing samosas, then stuffing them still piping hot in our mouths, drinking home brewed chai and learning how to make all our favourite foods from the trip, like lentil dahl, chapati and palak paneer (paneer cheese in a spinach sauce). Everything tasted amazing and we all said we couldn’t wait to impress our friends and family with the recipes when we get home.

In the evening Dino treated us to the Dharohar Folk Dance show where we got to see a variety of traditional dances. The theatre was outside and the stage was part of an old palace built in the 18th century. It was lit with multi-coloured lights and the dancers costumes were even brighter. They twirled and span faster and faster until their skirts were just a blur. My favourite dance was one done sitting down where they gently clanged various bells attached to their bodies. The puppet performance was good fun and a brief reenactment between a God and a demon fighting was just strange but by far the most impressive was the woman who could balance 11 pots on her head while dancing!

With the tour now in full swing everyone was enjoying each others company, feeling more relaxed and making the most of every moment. Yet there was still so much more to see…